First of all, in the following chapters, I will touch on energy conservation, product development, how to proceed with work, etc. while letting you know quite subjectively what I have experienced or thought.

There are two kinds of wastes. One is a waste to be deleted, that is, a mottainai waste and the other a wasteful waste, that is, a necessary waste. As an example of the former, there is a waste of standby electricity consumption of communication equipment including facsimile, which I have been trying to reduce or save.

Facsimile machines with and without telephones are always connected to power supply, when they display the time and other information on the display and the electricity is being used all the time. We do not know when the phone and message will come in and it is necessary to keep the power on all the time because the messages cannot be received unless the power is on. That is why they think this power consumption is a necessary waste, which is a common idea among us.

But my thought has been different. Since the main function of the facsimile machines with or without telephones is to send and/or receive calls and/or messages, they just have to use electricity only when sending and receiving messages. It is just a waste to use standby electricity all while they are just standing by with no sending or receiving messages or calls.

I started writing this chapter in December 2002. It had already been 8 and 6 months since I developed Setsuden-mushi (a profit making device). At the beginning of 2002, I interpret this year as "my year" without permission. The reason is that since my first name in Japanese is pronounced Tsuguru and written using 2 in the Chinese character. Since the year of 2002 includes two 2 numbers, I simply thought the year of 2002 was my year.

I don’t know whether this selfish interpretation and belief came through or not, but a certain major company asked me for product sales, technical alliance, and technical use of Setsuden-mushi (a profit making device).

As mentioned earlier, Setsuden-mushi (a profit making device) I developed is an automatic switch designed to save electricity as the Japanese name indicates. I have a dream to stop one nuclear power plant in Japan with this Setsuden-mushi (a profit making device). I want to save 1 million kilowatt standby electricity consumption.

The index of this book is as follows. 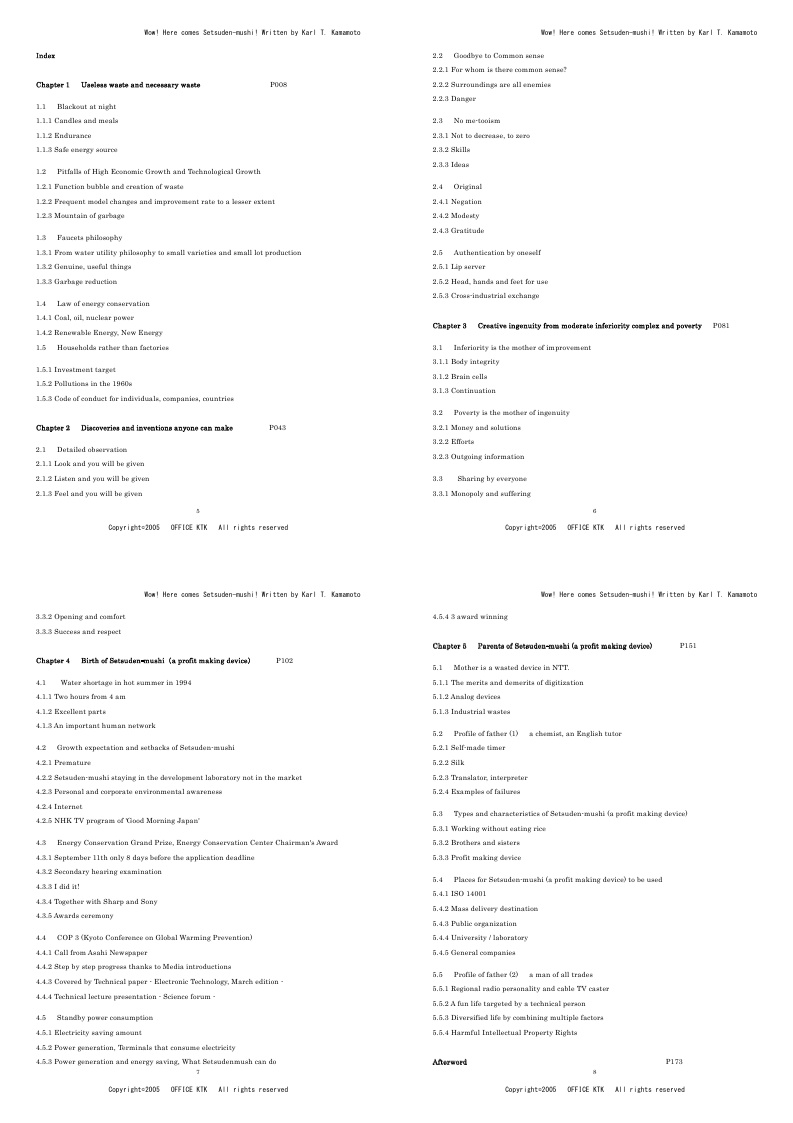